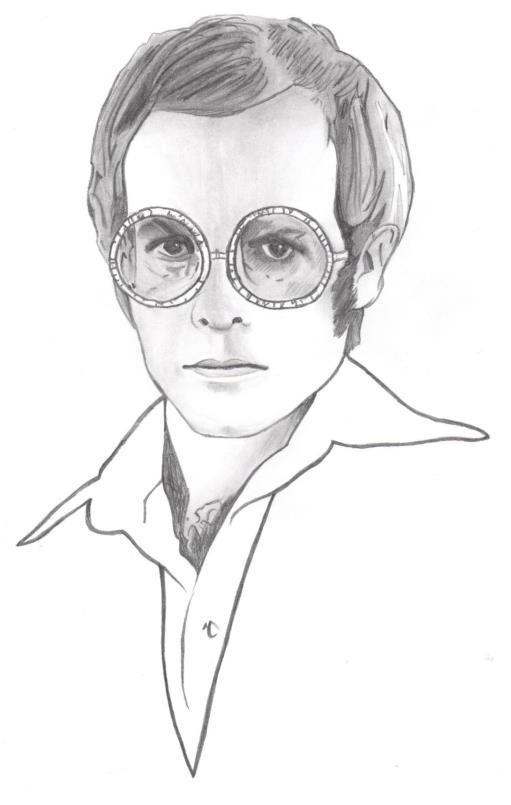 I have the best brother in the world.  For my birthday last year, he gave me two tickets to see Sir Elton John at the American Airlines Center here in Dallas.  My birthday was in February and the concert wasn’t until December!  I waited for ten months to see the show.  I had almost forgotten about it by the time it rolled around.

On the night of the concert, my husband and I made our way to our seats amongst the thousands of people who had come to see this legend on his final tour.  My parents had seen him in the early 70’s, before I was born, and had reminisced about what a fantastic show he put on back then – back in the days of his Donald Duck costumes and platform shoes.  My junior high school crushes were all set to the soundtrack of “Your Song” and “I Guess That’s Why They Call It the Blues.”

I had no idea what to expect.  The man is 72 years old.  Would he be able to fill that massive space?  Would he still have the range and power he had when he was a younger man?

Well, I tell you, I was blown away by what I heard.  He did not flip into falsetto like back in the day, but he sang his heart out and that part was still effortless.  I sat mesmerized by the nuance and control that can only exist in someone intimately familiar with his instrument.  The vocal power he demonstrated that night was unbelievable.  What I didn’t know until recently is that he had vocal fold surgery in 1987.

After I began looking into the story, I found that a fair amount has been written about how the surgery affected his singing style and vocal quality – there are even some YouTube videos juxtaposing his pre-surgery and post-surgery sound.  But you can look at all of this in a very different way.  I would argue that it was his rehabilitation and education in vocal techniques that affected the biggest change in his voice.

In addition to unreasonable touring demands, Elton John was very likely abusing his voice prior to the surgery.  He has said himself that he didn’t have a good understanding of technique.  Even if his singing technique was passable, voice therapists often work with singers who have great technique when they are singing, but damage their voices when they are offstage, sometimes because of how they use their voices when they speak and sometimes because of lifestyle choices that are not conducive to a healthy voice.

What could have been the underlying causes for vocal fold damage?  Perhaps his touring schedule was too demanding.  He has stated that he had a poor understanding of how to use his voice well while performing,  possibly signing in the wrong register or range, over-use of grinding as an effect, not breathing well, or not employing resonance to his advantage.  Any one of these could have led to a need for corrective surgery over time.

In addition, his lifestyle choices off stage would have contributed to the damage. He has talked candidly about his drug abuse and other dangerous behaviors in his past.  John said in a 2010 TV interview with Piers Morgan:

This is how bleak it was: I’d stay up, I’d smoke joints, I’d drink a bottle of Johnnie Walker and then I’d stay up for three days and then I’d go to sleep for a day and half, get up, and because I was so hungry, because I hadn’t eaten anything, I’d binge and have like three bacon sandwiches, a pot of ice cream and then I’d throw it up, because I became bulimic and then go and do the whole thing all over again…And I’m not being flippant when I say that, when I look back I shudder at the behavior and what I was doing to myself.”

Because of his surgery, he had to buckle down and learn better technique.  As he said, “Halfway through my career I got a voice change, thanks a lot! And I’ve learned to breathe properly, I’ve watched other people singing, I’ve become a much better singer. I’ve become a singer that plays the piano instead of a piano player that sings”

With the recent release of ROCKETMAN, the biopic that follows Sir Elton’s career, it seemed fitting to blog about the resilience of the human voice and the natural evolution that occurs as we age.  We are fortunate to have footage of almost the entire span of his career.  I can’t help but wonder if he would still be capable of touring if he had never had that surgery and learned about how to care for his voice.

Here are three clips of the man himself singing his hit “Tiny Dancer.”

The first is from 1980, before his surgery.  In this clip, you can hear a kind of gravelly quality creeping into the higher notes – still some beautiful moments, of course:

This next clip is from 1990, 3 years after surgery and 10 years after the first clip, the quality has changed.  It’s as if he has opened up the throat and chest and has allowed this amazing, seemingly bottomless base of support and power to enter into his style:

And this final clip is from 2016, 32 years after the surgery and still going strong:

He has been singing in huge venues for over 50 years!  Just amazing.  The voice surgery could possibly have been a career saving act for him. I would argue that the vocal surgery itself did not actually alter his voice, but rather it served as a wake up call that led Elton John to learn to properly use his voice.  This coupled with the choice to change damaging lifestyle habits and to get sober in 1990, allowed Elton John to cultivate the rich and powerful sound he has used to great effect for the second half of his career.  He transformed himself from a “piano player that sings” to a “singer that plays the piano.”  And he’s a pretty amazing piano player, too.

What are the takeaways?  Everyone – even one of the most successful singers in the world – can learn to use their voice better.  Being bad to your body will hurt your voice.  Just because you’re experiencing a setback or an injury does not mean you cannot recover or come back even stronger.

And all of this applies to the speaking voice – so even if you’re not a perpetually touring international superstar, but just talk a lot for work, consider doing what’s best for your voice.

Powerful speech is both loud and quiet.

Do Not Fear Accent Reduction Training.